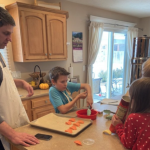 Picture is the author attempting to replicate the red chip protocol with his children acting as lab assistants. Prior to Brian Wansink being relieved of his duties due to scientific misconduct and his subsequent resignation, he ran the “Red Potato Chip Study” (Geier, Wansink & Rozin, 2012). The study claimed that people would eat fewer […]