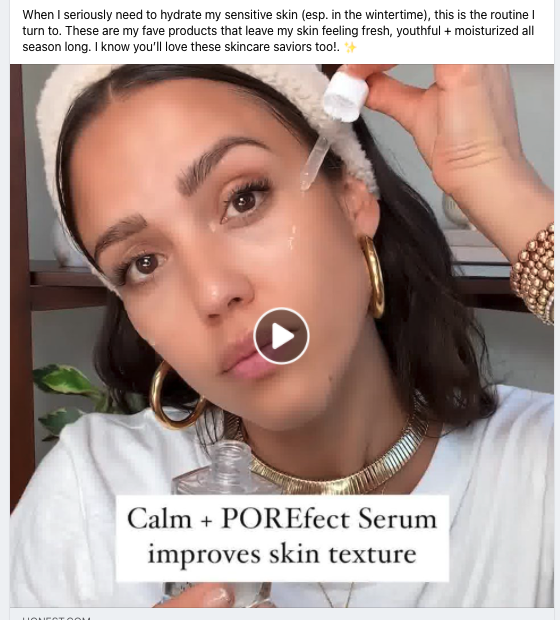 Yesterday I noticed an ad on Facebook for Jessica Alba’s skincare routine. I was surprised to be targeted with the ad to be honest because I’m not into skin care products, and I’m not a female, which would seem to be the target audience. I had recently visited the Honest Company website, which the ad is associated with, so it’s not too surprising that the company used what’s known as “ad retargeting” where I was added to their list of people to target with ads because I had presumably shown interest in the products in the past.

A bit of background: If you don’t know, Jessica Alba is a former movie star who now focuses her time on her family and her thriving consumer packaged goods (CPG) company, Honest Company. The ad was her effort to demonstrate Honest’s products. Alba is the founder of the company but not currently the CEO. As she is the Chairperson of the Board, though, she is technically the CEO’s boss. She also maintains control as the Creative Director.

But here’s the problem

A quick look through Jessica Alba’s Facebook page revealed that this is a general problem on her page. Most if not all of the engagement is dudes who are into her. This is very unfortunate for several reasons. First of all, she doesn’t seem to be doing anything in particular to show that she wants that kind of attention, and secondly it seems to be hurting her goal of showcasing products aimed at women since the situation has created a somewhat unfriendly situation for other women to visit. The goal of the ad campaign, and in fact the page itself, seems to be to highlight Alba’s company’s products. None of these dudes are likely to be consumers of the products, or even investors in the company frankly. So this appears to be something of a waste of money, generally speaking.

There are two key issues here: (1) the ads appear to be set to target everyone age 18+ equally when the target customer has clearly got to be females, and (2) the ads may be optimized to increase engagement. The second item means that the Facebook ads are set to show the ad in question more to people who are likely to like, comment, and share the post more. Who is likely to engage the most? Apparently, it’s these dudes that are in to her for her looks–not potential customers. A third potential problem is that the following on her Facebook page generally appears to be men who are into Jessica Alba, and not females who are interested in face care routines.

First of all, it is easy to stop targeting ads to males. Facebook’s demographic targeting tools are always changing, but it continues to be fairly easy to limit ad targeting to females only. That is an easy fix that could make a huge difference in this case. Second, while Facebook is always pushing their tools that optimize for various kinds of engagement, it is possible to turn off those features, or to optimize for engagement that you really want. For example, the comments and likes from dudes are not helping the ad’s chances of achieving meaningful engagement with potential customers. Perhaps, instead of optimizing for likes, comments, and shares, the ad can be optimized for website click-throughs. So people likely to visit Honest.com to learn more could be specifically targeted. Third, perhaps a different Facebook page could be used, other than Jessica Alba’s page, in order to sidestep her mostly male fanbase. The same ad could be used but posted on the Honest Company facebook page.

This is a good opportunity to get acquainted with Facebook ads manager. You will likely have to first set up a Facebook page before you can create an ad. Your goal is to see if you can find the appropriate ad settings to better optimize the Jessica Alba skincare ad campaign to side-step the thirsty dudes.