Designing, running and analyzing survey data during one class period

Today in my undergraduate Marketing Research class my students and I designed a survey to collect their opinions of State Farm’s decision to pull Aaron Rodgers ads. We were able to design the survey in Qualtrics, get students’ responses, and analyze the data during a 75-minute class period. This was made possible through the use of Statscloud which allows for lightning fast analysis on the fly.

The most difficult thing was getting them the data. If I had it to do over again, I would upload the Qualtrics data to Google Sheets, remove rows and columns I don’t want, then send them a share link. That’s sort of what we ended up doing but it took a while to get there.

It was also very difficult to create unbiased questions on the topic but it made for good discussion. I tried my best to be completely neutral during the discussion so that I wouldn’t in any way bias the students’ responses (they’re pretty opinionated though so I doubt I could have swayed them if I wanted to).

Q: State Farm made the right decision to take the Aaron Rodgers ads offline.
Why? The more students agreed that people should get the covid vaccine, the more they supported State Farm in their decision.
Things that didn’t seem to have an effect:
A really cool thing Statscloud does is give you the writeup when you run a regression:

A multiple regression analysis was conducted to examine whether the vaccine_opinion, rodgers_fan, influence, Political ideology, or customer variables significantly predicted right_decision. The results of the regression model indicated the predictors explained 61.55% of the variance, and a collective significant effect was found overall; R2 = 0.62, F(5, 16) = 5.12, p = .005. Examination of the individual predictors revealed the vaccine_opinion (β = 0.82, t = 4.42, p = .005) variable was a significant predictor in the model. 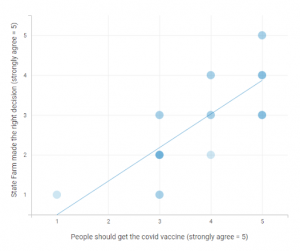